Many of you have probably noticed that I have a couple of tattoos on my arm here.  This one here was my very first tattoo; it’s probably hard to see from where you’re sitting, but the design is a rose sitting in the center of a cross.  I got this tattoo the day after I turned in my candidacy paperwork to start the process of becoming an ordained pastor. It has a lot of meaning for me.

I took the inspiration for this image from my time out at Camp Carol Joy Holling, both as a camper and later as a counselor.  There was a beautiful confessional rite that we would do sometimes, especially for our evening worship.  We had this big, wooden cross that had a nail hammered into it so that the pointy end faced outward.  And the way it worked was that everyone was given little slips of paper and invited to write their confession – whatever sins or troubles were on their heart – and then stick it up on the cross on that big nail.  Then, once everyone’s confessions were on the cross, they would light the little bits of paper on fire.  And as we watched everyone’s confessions go up in smoke – almost like incense to God – the edges of the papers curled inward and formed the shape of a flaming rose.  It was beautiful, all ashy gray and fiery orange – such a powerful image.

I still remember the first time I ever saw it.  I was in eighth grade and we were required to go to camp in order to get confirmed.  I was not exactly crazy about the prospect of going to church camp – and it didn’t help that the other kids I was going with were some of the kids that had bullied me from the time that we were in kindergarten together.  And my own relationship with God at the time had been pretty rocky ever since my mom died when I was nine.  I had gotten this idea of God as sort of a distant, disinterested jerk who didn’t care all that much that I was getting bullied by the other kids in my class – a God who had taken my mom away because he somehow decided that he needed her more than I did.  Suffice it to say I was less than enthusiastic about having to spend a week at church camp.

But that night at worship that we did the confessional rite of the burning rose on the cross, something changed for me.  As I added my own little piece of paper to the cross and then watched it burn and become part of the rose, I had this sudden, overwhelming sense of God’s presence.  And it didn’t feel distant or angry or disinterested; I felt God as loving and close – and for the first time ever, I had the sense of God as someone who grieved with me over the loss of my mother, as someone who shared in the pain I felt at being rejected and bullied by my peers.  It was awe-inspiring and humbling to realize that God had so much care for me. 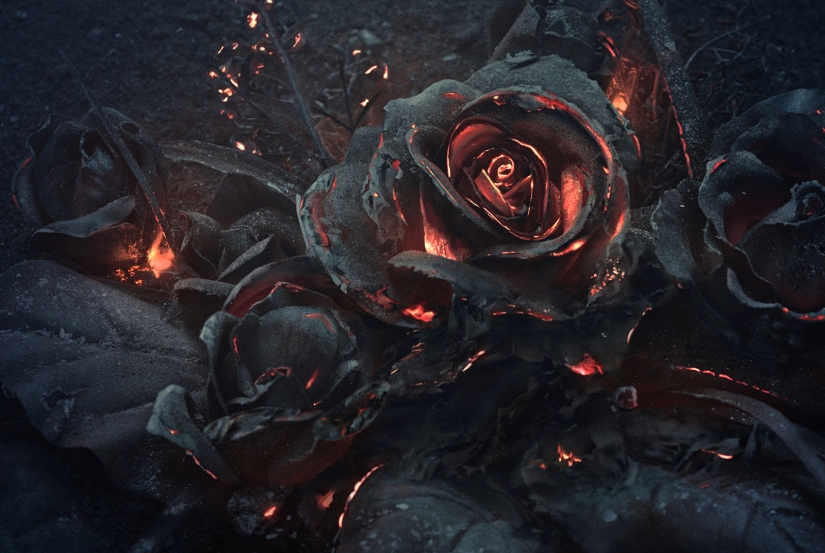 I thought of this encounter while I was reading our texts for today.  Our readings this morning are full of these awesome encounters with God.

In our first reading, we heard the call story of Isaiah. Isaiah recounts this amazing vision of God seated high on a throne, wearing a fabulous robe whose hem alone fills the entire temple.  And there are angels flying above the throne, singing so loudly that the temple shakes with the sound.  And in response to all this glory, Isaiah is completely overwhelmed.  He falls to his knees, crying out, “Woe is me! I am lost, for I am a man of unclean lips, and I live among a people of unclean lips; yet my eyes have seen the King, the LORD of hosts!”

In our second reading, Paul is writing to the Corinthians and he refers to his kind of similarly dramatic encounter with God on the road to Damascus – you probably remember the story.  Paul started out zealously persecuting the early church for heresy, but he was stopped cold by a vision of Jesus in a blinding flash of light. Paul is overwhelmed and falls to the ground and is left blind for three days.

In our gospel reading, Simon Peter encounters God in the flesh.  He had actually met Jesus before – Jesus even healed his mother-in-law a few verses before the story we read today – but for Simon Peter, this encounter was next-level.  He and his crew have been up all night trying to catch fish and have finally decided to call it quits.  When Jesus strolls up and asks him to take him out in his boat, Simon agrees.  But when Jesus tells him to let down his nets for a catch, Simon protests that they have been working all night and haven’t caught a thing.  But he trusts Jesus enough to do it anyway – and miraculously, they start pulling in so many fish that the nets start breaking and even the boats begin to sink.  Simon Peter is overwhelmed by this and falls to his knees – and in kind of an echo of Isaiah, he cries out “Go away from me, Lord, for I am a sinful man!”

What I find most striking about all these stories is the way that these awesome encounters with God leave a mark on the people who experience them.  In some cases, it can even be a physical mark, but it always leaves their lives forever changed.  Isaiah’s lips are touched by a burning coal and he cries out, “Here I am, send me!” and he devotes the rest of his life to being God’s prophet.  Paul’s sight is restored by another disciple, and he is baptized, and immediately runs out to start proclaiming Christ to the entire world – and eventually his writings even become part of the scriptures!  And Peter is told by Jesus, “Do not be afraid; from now on you will be catching people.”  And even though Jesus had just turned Simon Peter’s fishing business into a very lucrative one, when Jesus calls him and James and John into mission, they leave everything and follow him.

And even in my own life, that encounter with God in the burning rose on the cross started me off on a path that eventually led me here. And of course, it’s left its mark on me as well.

And even though it might be hard for us to relate to some of these more dramatic stories of encountering God, I have heard stories from many of you of encounters with God in your own lives.  I have heard stories of phone calls or visits that came just at the right moment.  I’ve heard stories of experiencing the awesomeness of God in a moment of natural beauty.  And I’ve heard beautiful stories about the ways that you have felt God’s strong, sudden presence in the midst of times of hardship and grief.  It doesn’t have to be a vision of God seated on a throne with angels in order for it to be a powerful experience of God’s awesome presence and love.

And these experiences can be overwhelming – and even bring us to our knees in some sense.  They leave their mark on us.  And they leave our lives changed.  When the veil of daily life is drawn back – even just for a moment – and we catch a glimpse of God at work, the way we look at the world is forever changed.  Because we have seen that our God of love is at work in all things, loving the world, moving hearts to repentance and compassion, and working through hearts and hands for the healing of the world.

And that, I think, is the most awesome and overwhelming piece of all of this.  Isaiah and Paul and Peter – and even occasionally we – are given glimpses of God’s awesomeness that are enough to bring us to our knees.  But God doesn’t leave us on our knees, overwhelmed and in awe. God chooses to use our hearts and our hands – chooses to use us as witnesses of the things we have seen and as bearers of the love we have received.  From these encounters, we are called into mission sharing God’s kingdom with the world.

And I think – or at least, I hope – that’s why we’re all here today.  We’re here not because anybody is forcing us to be here, but because we’ve caught a glimpse of something.  We’ve seen or heard or felt something of God that left us wanting more – something that piqued our curiosity enough to keep us coming back.  Something that left a mark.

Day Hefner is the pastor of St. John’s Lutheran Church in Schuyler, NE. Pastor Day originally hails from Coleridge, NE, and most of her family still lives in the area. She is a graduate of Nebraska Wesleyan University and the Lutheran School of Theology at Chicago (LSTC) and a former staff member at the Nebraska Synod office in Omaha. Also a Returned Peace Corps Volunteer, Pastor Day is fluent in Spanish (and English!) and specializes in bilingual ministry development. She has been active in ministry, education, and activism with immigrants and refugees in Nebraska, Chicago, New Mexico, and Texas. Pastor Day is particularly known for her boisterous laugh and for her total lack of control around craft supplies (especially yarn). View all posts by Day Hefner