Our gospel lesson for today starts off with kind of an odd-sounding argument between Jesus and some Pharisees. The Pharisees notice some of Jesus’ disciples eating without having washed their hands first – and so they go to Jesus to make a big stink about it.  Now, as someone reading this in the 21stcentury, it can be kind of hard to see what the big deal is.  I mean, yeah, that’s kind of gross I guess, but there’s no need to like make a federal case out of it.

But the complaint that the Pharisees make to Jesus is about breaking tradition, not about spreading bacteria (and not just because they wouldn’t have had any idea about what bacteria are).  They were concerned with uncleanness, but it was ritual uncleanness rather than physical uncleanness.  The Pharisees saw the nation of Israel as a nation of priests, and so they expected everyone to follow the same priestly rules and traditions that they themselves had been given.

This came from a good place. These practices were something that set the Jewish people apart and showed their devotion to God.  It was an important part of their identity.  And it was a means of resistance.  The Jewish people were a marginalized community living under the thumb of the Roman Empire, and the traditions handed down from generation to generation were how they maintained their unity and identity as a people. And it was the duty of the Pharisees to protect and pass on those traditions.

But over time, those traditions became rigid and inflexible.  They became “the way it’s always been done.”  We know how that goes, don’t we?  And instead of pointing to God, these rules and rituals and practices became ends in and of themselves.  They became a way to show that you were better than everyone else.  This is what makes Jesus angry with the Pharisees.  And it’s why he says to them, “You abandon the commandment of God and hold to human tradition.”  Ironically, over time the traditions and practices of the Pharisees actually started to take after the dominant culture they were supposed to be resisting. Religion in the Roman Empire was mostly concerned with saying the right things and having the right set of beliefs – namely, whatever made the emperor happy.  Religion was about power, and not so much about relationship with the divine – and Jesus was furious to see that those attitudes had started creeping into Jewish practice.

As our reading from James phrases it, this was religious practice that had been “stained by the world.”

Actually, James gives us some wonderful imagery to help us better understand what he’s talking about.  He describes the law – the word of God – as a seed that has been planted in the soil of our hearts.  We are called to care for and nourish this seed of the word.  And as any good farmer or gardener knows, an important part of the work of growing things is to pay attention to your field to recognize weeds when you see them and to get rid of them as soon as possible.  I think it would be fair to say that what Jesus saw in the Pharisees was that their hearts were in need of a good weeding!

This sort of spiritual gardening, or spiritual farming, is an important lesson for us to learn as well. We too need to work to weed and tend and cultivate the fields of our hearts so that we can remain rooted in the word of life that God has given us.  It is as important now as it was when these words were first written.

We are not a marginalized people like the Jewish people were.  But we do live in a culture that is often at odds with our faith.  Our biggest challenge today is that we live in a society that often claims to be Christian, but whose actions are often not very Christian at all.  We’ve spoken before about the divisive attitudes that people have, whether left or right.  We have the world’s largest prison population, and we invest far more money in war than we do in peace.  We increasingly cut taxes and regulations on the wealthiest among us, allowing the rich to get richer and the poor to get poorer.

And there are all kinds of weeds just ready and waiting to take root and start growing within us, false ideas of what it truly means to serve God.  Some of these weeds are really easy to spot: for example, there’s the prosperity gospel, televangelists trying to convince people that material wealth is a sign of God’s favor, and that when people are sick or suffering it’s because they just didn’t believe hard enough and they should send more money. There are “Christian” groups who seem to believe that the most important qualification for being Christian isn’t to be rooted in God’s word or to love your neighbor as yourself, but to be anti-abortion or pro-gun or to hate gay and trans people.  Sometimes these weeds are harder to spot.  Like with the Pharisees, sometimes it’s that the richness of our relationship with God gets reduced to just saying or believing the right things – to “the way we’ve always done it” – and maybe putting a Jesusy bumper sticker on our car.  We settle for plastic flowers instead of a vibrant garden of the word.  It may look pretty, and it may make us feel good, but it doesn’t give us life.

Our reading from James and our gospel reading both urge us to be on the on guard about these things. Both of them teach us how to look out for weeds growing up in our hearts.  It’s important to know what they look like so that we can clear them away to make space for the seed of the word to take root and grow in us.  In fact, Mark’s gospel gives us a whole long list of weeds to look out for by name, including things like avarice, deceit, envy, slander, and pride.

And all of our readings give advice for how we can actively cultivate the word that has been planted in our hearts.  We have a veritable gardening catalogue at our fingertips this morning!  Our reading from Deuteronomy emphasizes God’s nearness to us and urges us to keep the commandments and pass them on to others, so that we may grow to be “wise and discerning.”  Our psalm cautions us to be careful with the words we speak, so that we don’t hurt others with the things we say.  The psalmist also urges us to be honest with our neighbors and to act with justice in our business dealings.  Our reading from James instructs us to care for those who have been marginalized – like widows and orphans – and to keep ourselves from putting worldly things ahead of Godly things.  And our gospel reading reminds us always to keep our hearts fixed on God.

James rightly points out that it’s not enough to just be hearers of the word – we must be doers also. We must actively live out our faith. I don’t have to tell you that you can’t just plant a seed and leave it and come back months later expecting a good harvest.  You have to water it and protect it and weed the ground around it and nurture its growth.

Now, to be extremely clear, this is not a works-righteousness kind of thing.  Actively living out our faith has nothing to do with our salvation – nothing.  We are saved through grace alone.  God gives us the free gift of grace no matter what state the fields of our hearts might be in.

But actively living into our faith, choosing to nurture the seed of the word, means that we start to experience the benefits of our faith now. Eternal life with God is about much more than just what happens after we die.  We can already start living as saved people now, growing in wisdom, in compassion, in humility, and in grace.  This is our witness to the world.  And through our living, we teach others to till and tend the soil of their hearts, to tell the weeds of the world apart from the word of God.  And we do this by boldly bearing forth fruit – good fruit – in our own lives.

The seed of the word has already been planted in us, and it is ready to grow into a bountiful harvest. Amen. 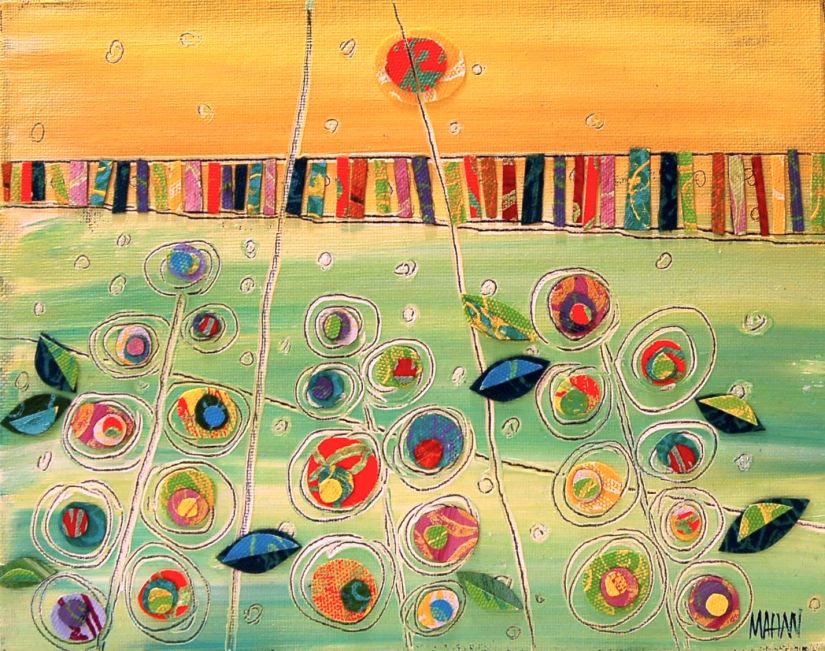 Day Hefner is the pastor of St. John’s Lutheran Church in Schuyler, NE. Pastor Day originally hails from Coleridge, NE, and most of her family still lives in the area. She is a graduate of Nebraska Wesleyan University and the Lutheran School of Theology at Chicago (LSTC) and a former staff member at the Nebraska Synod office in Omaha. Also a Returned Peace Corps Volunteer, Pastor Day is fluent in Spanish (and English!) and specializes in bilingual ministry development. She has been active in ministry, education, and activism with immigrants and refugees in Nebraska, Chicago, New Mexico, and Texas. Pastor Day is particularly known for her boisterous laugh and for her total lack of control around craft supplies (especially yarn). View all posts by Day Hefner